El Salvador bought off the “Bitcoin price drop,” trading dollars for Bitcoin at a time when it believes it remains undervalued by the global market.

President of El Salvador Nayib Bukele confirmed via Twitter on Monday that the Latin American nation bought the ‘Bitcoin price drop’, trading dollars for Bitcoin at a time he believes it remains undervalued by the world market.

Bitcoin’s price was around $ 45,700 at the time of Bukele’s tweet announcing the purchase, against highs of nearly $ 50,000 earlier in the week.

On September 6, the day before Bitcoin officially becomes legal tender in El Salvador, the President announcement that the country bought its first 400 BTC, saying at the time that it planned to buy “a lot more” with public funds. With this historic announcement, El Salvador became the first country in the world to publicly put Bitcoin on its balance sheet.

Bitcoin was declared legal tender in El Salvador the next day. Its price dropped from around $ 51,000 to $ 43,000 when President Nayib Bukele again announced that El Salvador had bought the dip. Bringing the country’s total Bitcoin reserves from 400 to 550 BTC.

The price of Bitcoin continued to drop to around $ 44,700 after Bukele’s announcement, until around 6 a.m. EST Monday morning.

The news comes at a time when international figures like Edward Snowden are urging countries to embrace Bitcoin. After El Salvador made Bitcoin legal tender, the famous whistleblower pointed out that Bitcoin favors those who adopt it early, putting pressure on other nations, who will be penalized for falling behind. 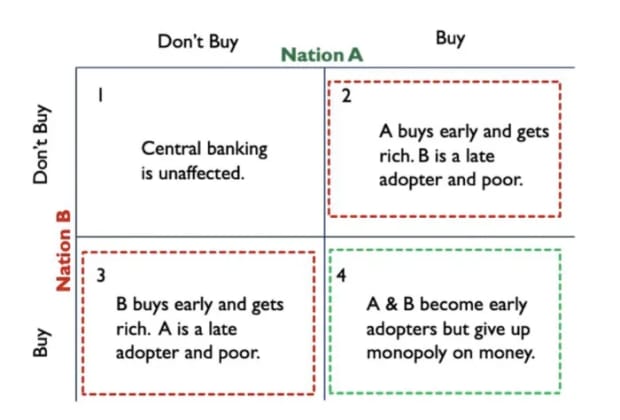 Among the second countries interested in publicly adopting Bitcoin and continuing Bitcoin mining are Laos and Ukraine.

The world is watching this experience, and Bitcoiners are eager to see which country will be next to adopt Bitcoin as nations are forced to compete or be left behind. The game theory prisoner’s dilemma began in global politics, and nation states that embrace Bitcoin first have a great advantage.