Demand
Home›Demand›Evergrande crisis: metals index down 6.8% amid fears of a drop in Chinese demand

Evergrande crisis: metals index down 6.8% amid fears of a drop in Chinese demand

There was a collapse in metals inventories on Monday as a debt crisis at one of China’s largest real estate developers, Evergrande, caused industrial metals and ore prices to drop globally.

The BSE Metal Index, which tracks prices for India’s 10 largest metal and mining companies, fell 6.8% on Monday, its worst performance in months. In comparison, the Sensex was down 0.9% on the day.

Massive sales in the metals sector were led by steelmakers and iron ore producers, while non-ferrous metal producers got off with minor losses. Tata Steel was the biggest loser and lost 9.5% on Monday. It was followed by Jindal Steel & Power (9.1%); NMDC (7.7%); and JSW Steel (7 percent).

Monday’s liquidation of metal stocks dug a hole of Rs 57,000 crore in the pocket of investors. The 10 stocks of the BSE Metal index ended the day with a combined market cap of Rs 8.85 trillion, up from Rs 9.42 trillion on Friday.

This is a sharp reversal for metals stocks, which were among the biggest winners in the post-pandemic rally on the stock exchanges. The BSE Metal index is still up nearly 234% since March 2020 against a 98.5% increase in the Sensex over the period.

However, including Monday’s drop, the BSE Metal Index is now down 9.2% since the end of July this year (see attached charts). 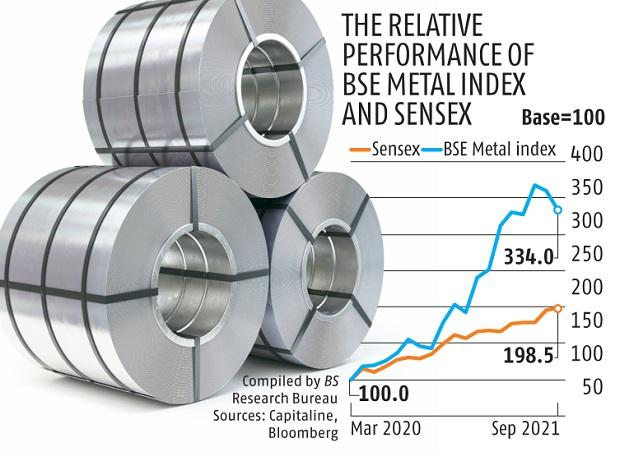 While the immediate trigger for the sell-off of the metal space was the debt problems of Evergrande, China’s largest real estate developer, most analysts expect a further correction in metal prices and stocks. of metals in the coming weeks.

Evergrande’s default is expected to cause financial contagion in China’s real estate and construction sector, leading to more defaults and a sharp correction in mainland Chinese house prices. This will cause a sharp decline in construction activity and new property launches in China, negatively affecting global demand for steel and other building materials.

â€œLeading indicators of Chinese demand for steel continue to deteriorate. Weak real estate data along with contagion fears due to defaults in the high yield developer market set a context for the current cuts in steel production, â€write Abhijit Mitra & Mohit Lohia of ICICI Securities .

Real estate accounts for nearly 40% of all steel consumption in China, analysts say, and the Chinese economy consumes 55-60% of global steel production.

â€œWhile Evergrande is the 800 pound gorilla on the market right now, there has been a series of bankruptcy lawsuits behind it. Combining the 10 names facing significant stress, the liabilities exposed to default amount to more than $ 500 billion, including payments to suppliers and employees. The entire ecosystem is on the brink of collapse, posing a huge risk to the bulk metals complex, â€said Dhananjay Sinha, Managing Director and Chief Strategist, JM Finance Institutional Equity.

A drop in demand for metals in China will lead to a sharp drop in the prices of metals, especially steel and iron ore, negatively affecting the incomes and profitability of steelmakers, including Indian companies.

Analysts point out that a sharp increase in steelmakers’ margins and profitability over the past two quarters has been largely due to higher price realization rather than volume growth. They now expect the price gains to reverse.

For example, analysts at ICICI Securities expect a sequential decline in margins and profitability for steelmakers in the coming quarters, especially Steel Authority of India (SAIL) and Jindal Steel & Power.

The iron ore market reacted first, and ore prices in China have fallen 23% during the month of September so far. By comparison, HR steel prices in China were flat and rose 0.8% in the month, and only fell 1.5% last week. Likewise, the London Metal Index, which tracks prices for non-ferrous metals, has corrected 0.74% in the month so far.

An incomplete and exhausted recovery